CCP: One Century in Ten Lives

MORE ABOUT THE EVENT:
On 1 July, the PRC will commemorate the founding of the Chinese Communist Party one hundred years ago. The Chinese Communist Party: A Century in Ten Lives documents this century, not by examining CCP policy, CCP campaigns, or CCP factional strife, but by telling the lives of ten of its members, one for each decade of its existence, to provide a mosaic of what it was like to live in, for, with, and under the Party. They range from intellectual figures such as Wang Shiwei, the Yan’an rebel rouser, and economic reformer Zhao Ziyang to 1950s movie star Shangguan Yunzhu and the disillusioned but still loyal intellectual Wang Yuanhua, who critiqued the party in the 1990s. With contribution from Europe, the PRC, the USA, and Canada, the editors hope that the book provides a realistic sense of the diversity of the CCP, the hopes and disappointments its members have experienced, the presence it has had in their lives, and its remarkable ability to learn from its past mistakes.  The three editors will discuss their new book, with moderation by Melinda Liu.

MORE ABOUT THE SPEAKERS:
Timothy Cheek is the Louis Cha Chair in Chinese Research at the University of British Columbia in Canada as well as the Director of UBC’s Asia Research Center. His work has concentrated on the study of Chinese intellectuals in the twentieth century and the history of the Chinese Communist Party. His more recent publications include The Intellectual in Modern Chinese History (CUP, 2015) and Voices from the Chinese Century: Public Intellectual Debate in China (with co-authors David Ownby and Joshua Foge, Columbia, 2020).
Klaus Muehlhahn is the President of Zeppelin University in Germany, a position to which he was appointed in March 2020 and which took him away from the Freie Universitat of Berlin, where he had taught and conducted research from 2010. His pathbreaking Criminal Justice in China (Harvard UP, 2009) was awarded the John K Fairbank Prize of the American Historical Association. Klaus has also written on Germany in China and Bellknap Press of Harvard University Press published his survey history, Making China Modern: From the Great Qing to Xi Jinping in 2019.
Hans van de Ven is Professor of Modern Chinese History at Cambridge University, where he has worked his whole career. He has written on the history of the Chinese Communist Party,  China’s military history, and the history of globalization in China. His most recent work is China at War (Profile, 2017/Harvard 2018/Linking 2020). 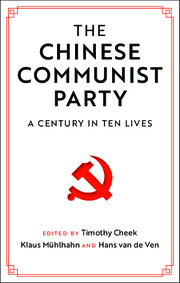