WHAT: “Historian Arne Westad on James Earl of Elgin: An Imperial Life,” in conversation with Jeremiah Jenne, followed by Q&A — a RASBJ online event

HOW TO JOIN THE EVENT: This online event is free and exclusively for members of RASBJ and RAS branches.  If you know someone who wants to join the RASBJ to attend this talk, please ask them to sign up at https://rasbj.org/membership/ at least 48 hours before the event.

MORE ABOUT THE EVENT: In the middle part of the nineteenth century, the ideas and practices of empire went through fundamental reconfigurations.  Still built on the old imperial processes of subjugation and exploitation, the new imperialism also carried an ideology of reform, improvement, and order, not unlike those presented to working-class subjects of empire in Europe.  The new vehicles for managing and expanding empire were reactions against anti-imperial resistance as well as pressure from humanitarian ideals.  At the core were struggles over concepts of race, development, and capital that would help undo almost all empires in the century that followed.

As the most influential, and probably also the most powerful, empire in the mid nineteenth century, Britain relied on its military forces and an extensive imperial civil service to serve its purposes.  James Bruce (1811-1863), the eighth Earl of Elgin, may serve as an epitome of the imperial agent in his era: Governor of Jamaica and Canada, emissary in China and Japan, and Vice-Roy of India, Elgin became the quintessential troubleshooter for the British empire as it was immersed by dissension and rebellions.  His life allows us to explore dimensions of imperial rule in the mid nineteenth century at their peak and their nadir.

MORE ABOUT THE SPEAKER:  Odd Arne Westad is the Elihu Professor of History and Global Affairs at Yale University, where he teaches in the history department and the Jackson Institute of Global Affairs.  Previously, he was the S.T. Lee Professor of US-Asia Relations at Harvard University, teaching in the Kennedy School of Government.  He is an expert on contemporary international history and the eastern Asian region.  Westad has been named one of the LSDP Top 100 Global Thinkers, mainly for his work on linking policymaking to an understanding of history.

Professor Westad won the Bancroft Prize for The Global Cold War: Third World Interventions and the Making of Our Times. The book, which has been translated into fifteen languages, also won a number of other awards.  Westad is also the general editor of the three-volume Cambridge History of the Cold War and the author of the Penguin History of the World (now in its 6th edition).  Restless Empire: China and the World since 1750, was released in the US and UK in 2012 and made two Top 100 lists for that year.  The book won the prestigious Bernard Schwartz Book Award from the Asia Society, awarded annually for outstanding contributions to the understanding of contemporary Asia or U.S.-Asia relations.

His most recent book, The Cold War: A World History, was published in 2017 by Basic Books in the United States and Penguin in the UK.  A new history of the global conflict between capitalism and Communism since the late 19th century, it provides the larger context for how today’s international affairs came into being. 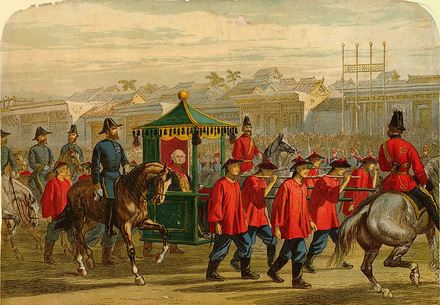