WHAT:  “How History Inspires Fiction: ‘Rumours from Shanghai'”, an online RASBJ talk by author Amy Sommers in conversation with Jeremiah Jenne, followed by QA
WHEN: Aug. 11, Wednesday 8:00 PM – 9:00 PM Beijing Time. This is an online event.

HOW TO JOIN THE EVENT:

MORE ABOUT THE EVENT: The novel “Rumors from Shanghai” opens in 1940 when African American law graduate Tolt Gross arrives in Shanghai to find a heady mix of cosmopolitanism and international intrigue, evocative of Cold War-era Berlin. He not only enjoys professional success and cross-cultural romance but also uncovers evidence of a Japanese covert mission to attack Pearl Harbor. The book is a work of historical fiction for which the author did extensive research into the conception and planning of the Pearl Harbor attack. Moderated by Beijing historian Jeremiah Jenne, the author will discuss how she wove together her novel’s exploration of hubris and bigotry, and their power to destroy so much more than their intended target– and what inspired her to write the book.

MORE ABOUT THE AUTHOR: Amy Sommers says she became obsessed with China after Deng Xiaoping visited her hometown of Seattle in 1979, as part of an historic trip which signalled to the West that China was opening up and reforming its economy. She studied Chinese, became a corporate lawyer focused on China, and in 2004 found herself living in Shanghai with her family and working as a partner in a major international law firm. For over 11 years she lived in Shanghai and, in her spare time, incorporated what she was learning about pre-World War II Shanghai together with her research into the run-up to the Pearl Harbor attacks, as well as early Black presence and success in places not usually expected, such as early Seattle and pre-World War II East Asia. 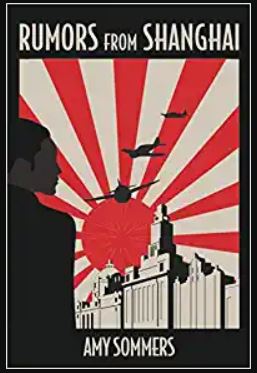